Home » Family Life » Our Journey from Breastfeeding to Formula, part 1
This post may contain affiliate links view our disclosure

Yesterday’s post and the discussions in the comments prompted me to do something I’ve wanted to do for a while and that is share my breastfeeding experience. I’ve discussed nursing tanks I loved, bottles that worked for us when W was a newborn, worried about pacifiers, and even gave some formula advice that not everyone agrees on! But I’ve never shared exactly what I went through in the 4 months that W received at least some breast milk each day. I know I can be wordy and in this case, I’m pretty sure that will happen so I’m going to break it down into a few parts over the next few days. 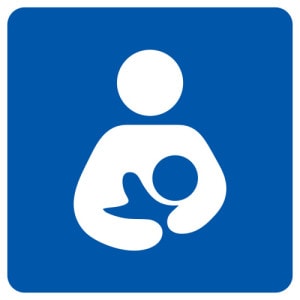 I suppose our story begins the night W was born. As soon as I was out of the tub and over to the bed in the birthing room, W was in my arms and we were skin to skin. My midwife was helping get him to latch on for the first time and I realized that… wait, this story actually starts before W was born.

When I found out I was pregnant, I knew I wanted to breastfeed. It wasn’t even a decision I had to think twice about making. There were three things I knew even before I got pregnant. One was that I didn’t want to give birth in a hospital, the second was that I wanted to use cloth diapers, and the third was that I would breastfeed.

Very early on in my pregnancy I was able to get an amazing deal on a Medela Pump in Style Advanced and got it brand new for less than half price. I went ahead and made the purchase because I knew I would need a pump when I returned to work after having W. That was my first step towards the way I was certain I would be feeding W.

Throughout my pregnancy, I read a lot about breastfeeding and ways to help encourage the breastfeeding relationship. I researched which bottles would be best for a breastfed baby since W would need them when I went back to work. I debated taking a breastfeeding class to get more information and finally decided to go to one with my mom. Once a month, a breastfeeding class is offered at the birthing center where I delivered W. As soon as I could, I signed up. Due to low enrollment because of upcoming holidays, the class was cancelled, but the lactation specialist called me to let me know that she also did classes at the hospital so I was able to sign up for one of those. Luckily there was one more scheduled before my due date, so while I waited for the rescheduled class I continued to read all that I could online.

Finally when the day arrived, my mother and I went up to the hospital to the class. The lactation specialist was great and I really liked her a lot. I was one of just two people on the registration list who weren’t giving birth at the hospital. The other woman was also using my birthing center. We watched videos, discussed products, talked about issues a new mother might have and how the family could support her, discussed positioning, and took home a bunch of information. It felt like a day well spent! In preparation for W’s arrival, I picked up some nursing tanks, some breast pads, and other accessories. We were ready to go!

So the night W was born finally arrived! As soon as I was out of the tub and over to the bed in the birthing room, W was in my arms and we were skin to skin. My midwife was helping get him to latch on for the first time and I realized that… I had absolutely no idea what I was doing! I was exhausted and emotional and nothing about it felt natural at all. Still, I wasn’t discouraged. I was just tired and amazed at the little boy I was holding in my arms. I fed him a few more times before we were finally getting ready to head home. Looking back, I think one thing I might like about a hospital birth would be time with the lactation specialists. You don’t get that much when you’re headed home 4 hours after giving birth! 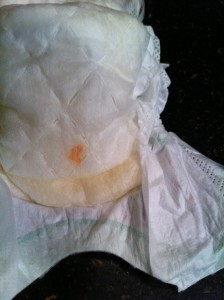 The first few days home were a blur of taking care of a newborn. Our third day home we went to our first pediatrician appointment. W had lost some weight, but that was to be expected. I had some concerns because there was some brick colored dusty looking stuff in some of his diapers. The pediatrician (who was NOT the pediatrician I interviewed with, but another in the same practice) said she had never seen it before. On a side note, I would never go to that doctor again, luckily it was a scheduling mistake and we only go to the pediatrician I interviewed prior to W’s birth. But back to story… it turns out that you can easily look up “brick colored dust in newborn diapers” on the internet and find out that they are urine crystals and are perfectly normal. Everything said that once my milk came in we should stop seeing the crystals. If we didn’t, it was time to see the doctor. If you haven’t seen this before, the photo shows an example. This is not a photo I took, but it does look a lot like what we were seeing although W was wearing cloth diapers.

A nurse from the birthing center came to do our home visit on the same day and said everything looked good except that W was looking a bit jaundiced. It was something I had noticed and something that would continue to get worse as the week progressed. I asked her about the urine crystals and she said they should go away within a few days when he was getting more milk. The continuation of urine crystals could be a sign of dehydration. Of course, we were watching the number of wet diapers as well. As the week went on we continued to see the crystals and the number of W’s wet diapers decrease. He seemed to latch well but would just fall asleep after eating for only a few minutes.

When he was one day shy of being a week old, my emotions combined with the struggle to keep him awake and latched on, his decreasing number of wet diapers, and his increasing level of jaundice had us calling the lactation center at the hospital. It was the same hospital we took the breastfeeding class at and I feel blessed to have had the number. My mom called for me and after hearing about the situation, the lactation specialist told us to come right in and she would fit us in. She asked if I had a pump and if I could pump anything. I had actually just tried the pump for the first time earlier in the day and got enough milk to just cover the bottom of the bottle. It was a small achievement that lifted my spirits. I was sure my full supply was on its way.

We spent 45 minutes with the lactation specialist, who ended up being the one who taught the class I went to so I felt very relaxed. She weighed W, then watched as I tried to feed him and helped me position him better. Then she weighed him again and I tried another feed. My mom took pictures of all of the positions we worked on. During the appointment, W ate less than an ounce. We discussed the fact that he fell asleep a lot and she taught me some techniques for keeping him awake. She checked his suck and taught me some techniques that would help strengthen his suck. We also discussed a pumping plan of action to build my supply. She gave me some syringes so I could use them while he was on the breast if I had any pumped milk to supplement with from previous pumping. 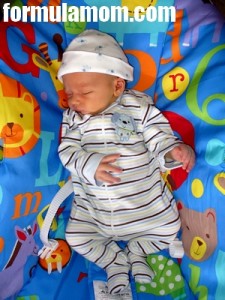 I went home very worried about my little boy but feeling more confident with the knowledge I had. Plus, the lactation specialist hadn’t said to use formula even though we had asked about it. She said we should give it a few more days and she would call to check on us. So we went home to begin what was, if I am completely honest, an extremely exhausting cycle of putting W to the breast, supplementing with the syringe (which would later be attempted with an SNS), and then pumping. It seemed like the moment I was finished pumping, W was hungry again and the process started all over. I was doing it all although my mom and J were there offering to help in any way they could. It was daunting and I will admit that I cried a lot, but I was determined. My one week old precious little boy was worth it all.

Read the rest of our story…