Our Domhnall Gleeson Interview is part of my coverage of the #TheLastJediEvent I attended on behalf of Disney. This post is sponsored, but all thoughts and opinions are my own.

Huge thanks to Disney and MomStart.com for the photos!

We first met Domhnall Gleeson as General Hux in STAR WARS: The Force Awakens. In the movie, Hux is in a power struggle with Kylo Ren for the leadership of the First Order.

At the end of The Force Awakens, General Hux is not in the best of positions. 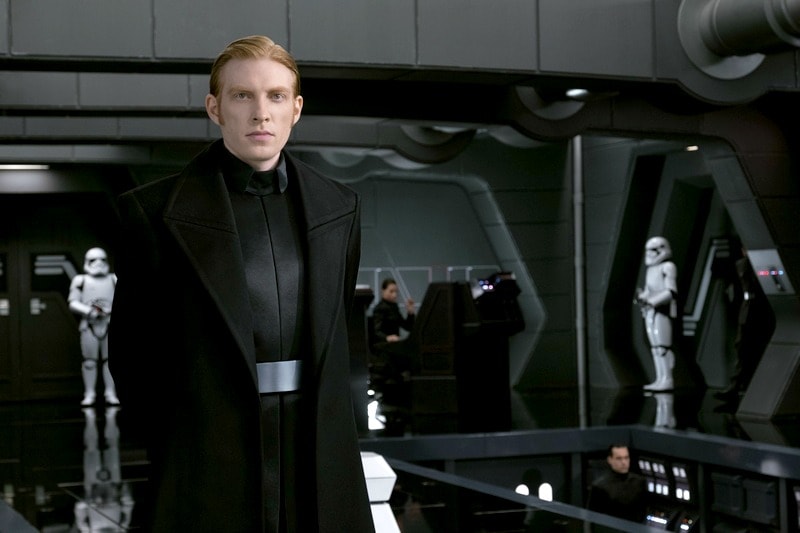 Domhnall Gleeson shared with us a bit about his character in the STAR WARS: The Last Jedi.

He believes that insecurity is where Hux starts from. I loved that he said that because I think it’s something that most of us can relate to at some point in our lives.

Gleeson also believes that Hux knows he’s not as strong as Kylo Ren. He knows Kylo Ren could crush him. I think it will definitely be interesting to see what happens to General Hux in The Last Jedi.

You might recognize Gleeson from his time in the Harry Potter films as Bill Weasley. We couldn’t resist asking him a fun question that brought up both his experience with Harry Potter and his STAR WARS experience.

In Harry Potter, he was a Gryffindor, putting him on the side of good. In STAR WARS: The Last Jedi, he’s obviously part of the dark side. So we asked him if he was more light or dark in his life.

He answered with a chuckle.

We all have our dark moments.

If that is his measure of darkness, I think he’s pretty safe!

We also asked him the lightsaber question we asked each of the actors we interviewed!

He actually has a lightsaber in real life! It’s red. But he also picked one up that they were giving out to fans at an event with Harrison Ford. That time he picked a green one.

So he’s a mix and match depending on his mood! That sounds a lot like most of us probably!

While you wait for Star Wars: The Last Jedi, check out all of our Star Wars coverage!